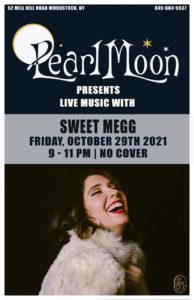 Join us for live music with Sweet Megg. 9-11 | No Cover
Sweet Megg was born and bred in New York City but her sound reaches far beyond the confines of Manhattan. Her voice is exceptional and colored with a vast variety of influences that she holds dear, including Billie Holiday, Patsy Cline, Edith Piaf, and Bessie Smith. Her music is steeped in many traditional American musical styles but also allows for influence from the present era and reflects the changes surrounding it. Sweet Megg says, “When jazz was born, it was exciting and made us laugh and cry. Jazz should be the most relatable of all music because it is pure human improvisation being broadcast in real time. Our goal with this group is to not recreate the past but to explore it and mix it with the future. I want to use our original music to create that theme.”
Her newest record, Under the Moonlight, comes out March 1st on Dala Records. The album was recorded in a mind-boggling two days and performed entirely live by Sweet Megg and her band, The Wayfarers. Consisting of Ryan Weisheit on tenor sax, bass sax and soprano sax, Sam Chess on trombone, Thor Jensen on electric guitar, Rob Adkins on upright bass and Chris Gelb on drums, The Wayfarers bring a timeless sound to the recordings and also had a role in crafting the arrangements on the album. Sweet Megg says, “I want our jazz to have a human quality to it. My voice or character comes through regardless because I’m singing but I thought it would be fun to find a way to bring in the characters of my musicians. There’s a reason I perform with them and I wanted that aspect to shine through our recording, so I had each member of this group write their own arrangement for the record.”
And what an excellent idea that was, because each arrangement exemplifies the personality of its arranger perfectly. Take Sweet & Slow for example, a down-tempo song that was arranged by saxophonist Ryan Weisheit. Originally composed by Harry Warren, Sweet and Slow takes on new life under the guidance of Weisheit’s arrangement as he re-harmonizes many of the original chords bringing new colors to the tune. Another member of the band leading the group into new territory is guitarist Thor Jensen, whose forward-thinking style of playing leads the band out of the 20s and 30s and into the era of Les Paul and beyond.
Sweet Megg’s recent touring excursions outside of the US were a huge success and she is now building up a following not only in New York, Nashville, Asheville, and other East Cost cities, but also internationally in cities like Moscow, Paris, Montpelier, and Kaliningrad.